About the Book Dead Running

Cassidy Christensen is running. Running from the mercenaries who killed her parents. Running from a scheming redhead intent on making her life miserable. Running from painful memories that sabotage her dreams of happiness. With two very tempting men competing for her attention, she hopes she’ll finally have someone to run to, but can she trust either of them? When secrets 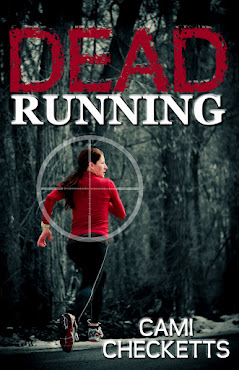 from her past threaten her family, Cassidy decides to stop running and fight for her future.

A light-hearted suspense with a side of PG-rated romance, Dead Running will have you lacing up your running shoes and impatiently waiting for the sequel.
Don’t miss the sequel to Dead Running.

Dead Running is available at:

*I was given a complimentary copy of this book. My opinions are my own.

When Cassidy Christensen’s sister-in-law convinced her to run in a 5K After injuring herself Cassidy just barely got through the finish line.  During this race she met and fell for 2 hot men Damon and Dr. Tattoo the plastic surgeon. Once the race was over the coordinators of the race had a few giveaways and Cassidy won an entry in to an upcoming marathon. She would be training with Damon. Committed to completing the marathon Cassidy dives into training but
she is not sure who to trust.

After reading this book and reading the description of the 2 hot guys I decided I wanted to start running.  Cassidy discovers a dead body in the woods and the action continues. The author keeps you in suspense and your are kept guessing on which love interest Cassidy chooses. The tattoo covered plastic surgeon name Jesse or the strawberry haired Damon. The book keeps you in suspense as you are left wondering which one of them is the bad guy and means her harm.

Cassidy has lost both her parents. Cassidy has made the hit list of an international slave runner trade and is only one step ahead of these killers out to get her in revenge for the actions of her murdered parents.   I could not put the book down. This book is full of mystery, action, romance and and yes even comedy.

About the Author Cami Checketts

Cami Checketts is married and the proud mother of four future WWF champions. Sometimes between being a human horse, cleaning up magic potions, and reading Bernstein Bears, she gets the chance to write fiction.