Book Review Of The New Power of American Women: The Essential Survival Guide

Book Review Of The New Power of American Women: The Essential Survival Guide

About The Book The New Power of American Women: The Essential Survival Guide (New Power of Women)

There has never been a time more important to comprehend the growing, global power of American women. American women are unique around the world and their new political, financial and awesome visual power is dramatically increasing. This book is about their special competitive advantages, the increasing American male vulnerability to women and the typically unknown affects of this expanding feminine power. It is also about our deepest internal beliefs about women and the way all Americans have been influenced by past female magnetism and prerogatives.

If you’ve read the best seller books, such as the “End of Men – The Rise of Women” or 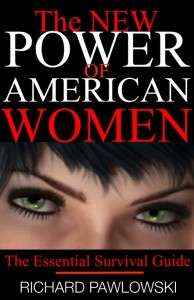 “Lean In” – you’ll understand why the author felt compelled to publish this book. The New Power of American Women puts the power of American feminism into a totally new perspective. Years of research, hundreds of personal interviews and quotes from well known professionals are brought together to inform and entertain as well.

Richard Pawlowski is the emerging new expert of the impacts of American feminism on the American male. He is a retired architect, real estate developer, entrepreneur and former economic columnist for San Pedro Today Magazine (Los Angeles). He has developed dozens of shopping centers and residential projects and was producer for Financial Video Network (FVN). He was also a co-founder of a national franchise.

He started writing “The New Power of American Women – The Essential Survival Guide” over 20 years ago and finally finished it in 2014. His first ebook, “2 Years in Tent” was self-published in 2013. That full-time outdoor living experience, brought out a totally new way of looking at life and both he and his wife Laura, now look back on that as a great adventure and blessing that changed them forever.

A grandpa with an unusual view of life and living, Richard lives with his wife of 49 years, on the Central Oregon coast of the USA.

You can learn more about the author and his book by visiting his website http://www.newpowerofwomen.com/. The books is available on Amazon.

The book is very well written, Richard Pawlowski backs up many of his believes with statistical data and quotes from other authors. The book is called The New Power of American Women and is considered by the author to be a “Essential Survival Guide” that pertains to the changes in the power of women in the workplace, in relationships and how it effects men. Richard Pawlowski book is mainly geared towards young men or women who are interested in the male perspective on how changes to our society today effects men. The book references female predators such as cougars, feminists, alpha bitches and how their objective is to demean men either in the workplace or in relationships. Yes, there needs to be an objective book out there that warns females of male predators and of course there needs to be a book out there that warns young men as well.

The book mentions other controversial subjects such as how men are effected by women in the USA who earn more money then them. How men are losing their jobs to women and how many are unemployed. That the American society is becoming anti male. The book talks about how women should stop with the pretense that they are not equal and that they are still the victims of men. How some women are marrying only to increase their wealth and are planning their divorce before they are married.

I do agree that our North American society as a whole is to consumed with materialism. We need to focus more on inner beauty instead of outer beauty. For a while I worked in a  Jewellery store selling engagement rings. Women would often drop by and pick their ring out before they bought it or showed their future spouse. They would talk about there loved ones and many were in love. We need to remember that not all of us women fit under a predator category.